The store will not work correctly in the case when cookies are disabled.

At Motif, our mission is not only to help moms and moms-to-be from pregnancy to postpartum, but also celebrate their entire motherhood journey. With August being National Breastfeeding Month, we wanted to highlight the different breastfeeding, pumping, and early motherhood experiences from real moms in an honest and personal blog series. Each week, we’ll be sharing a story from a different mom to showcase how unique everyone’s journey truly is!

This week, we have the honor of sharing Latoya’s story about her experience with breastfeeding and pumping, as well as her schedule and advice for new moms.

My Breastfeeding Journey with my Baby Girl, Laila, by Latoya Cottingham

I never thought I would be a proud pumping mama…

Growing up, I always knew that I wanted children. As I became an adult and matured further into adulthood, I learned that there was an alternative to baby formula. Yes, it was straight from the breast -breast milk. ‘Umm yea..no thanks’. It simply didn’t interest me and I had no intention on ever breastfeeding. However, once I confirmed that I was indeed pregnant, I began researching and exploring so many parenting options, which surprisingly included breastfeeding.

Upon learning of the many benefits of breastfeeding, I decided that I would try it. I contacted my insurance company and after much research through various sites, and even creating a comparison chart of about nine different breast pumps, I chose the Motif Luna. In addition to the design, hush motor, night light, and weight, I was impressed with the many reviews which stated that the slogan More Milk, Less Time, was true.

So the time had come. Baby Laila was ready to make her debut into the open world. I walked into the hospital confident. Knowing that I had all my necessities inside of the suitcase that I wheeled alongside my wobbling body. Yes, I said suitcase haha. That was my hospital bag. Inside, I included my Motif Luna breast pump. I thought I would need to use it at the hospital. Little did I know, I wouldn’t begin pumping until about day three when my milk finally came in. 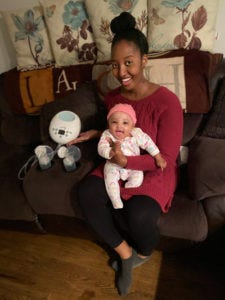 After Laila was born, the nurse laid her on my chest. It was the absolute best feeling in the world. Indescribable. A short time later, the nurse returned to assist with nursing. I was nervous. Though I’d attended the breastfeeding class sponsored by my hospital, I still felt I had no clue what to do. So there I was. Before the nurse even reached the bed to assist, I warned her that I would need to speak with the hospital’s lactation consultant. The nurse agreed to have one visit my room and continued to my bed for what would be the first of many nursing feeds. Laila latched immediately. I was blown away, and so was the nurse. It was so natural for her and I was so relieved that I wouldn’t struggle getting her to latch in the future. Truth be told, I probably would’ve been embarrassed if I didn’t get her to latch- though I know it sometimes happens and it’s perfectly normal. 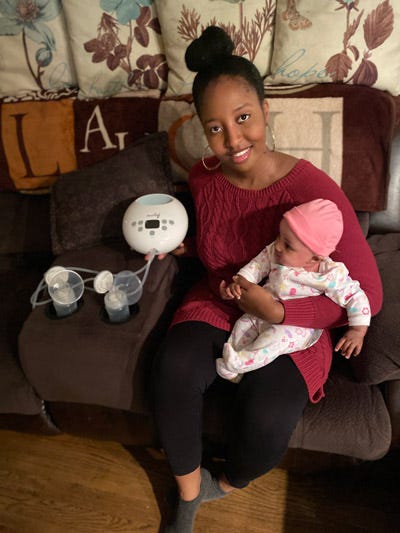 I gave birth on Easter Sunday. That Monday, I was released from the hospital. Thanks COVID-19. Any-who, during that time, I nursed so much. I kept telling the nurses, as they switched shifts, how much Laila was nursing and how easily she latched. I was proud. One nurse remarked, “Thirty minutes? Oh she probably was done feeding a long time ago.” Unbeknownst to me, nursing for too long would lead to nipple pain and it was horrible. Luckily, I had nipple cream and was able to repair within a few days. I was sure to avoid that mistake moving forward, as that had become the most difficult aspect of my breastfeeding journey.

Today, I feel like a nursing and pumping professional. I have my routine and it works very well for me. I pump about 5-6 times within a 24 hour period. Laila is almost four months now and has slept through the night since she was about two months. I am sure to wake up a bit prior to her early morning rising so that I can get myself together and pump. I maintain a great supply by eating well, drinking what feels like tons of water, and power pumping about 4 days a week.

Honestly, my social media family has made me feel so comfortable during this journey. It’s nice to know that I’m not alone. I also get great tips from other pumping mommies. For example, I saw a post that suggested adding a little oil to the inside of the flange before pumping and boy did that make a difference.

The most rewarding facet of breastfeeding and pumping is knowing that my baby is receiving all the necessary nutrients and feeling like I have an extra special bond with my baby girl. Added bonus: not running to the store to buy formula. I would suggest that all moms, even the moms-to-be who are reluctant or completely against it, try breastfeeding. Give it a try.

It’s not bad once you have a rhythm and your baby will be so grateful. Like all aspects of parenting, it takes time, patience, love, and support. All in all, as you and your baby grow together, you both will teach and learn from each other. I am not sure what made me change my mind about breastfeeding or what made me try nursing, but I can tell you that I am immensely thankful that I gave it a shot. 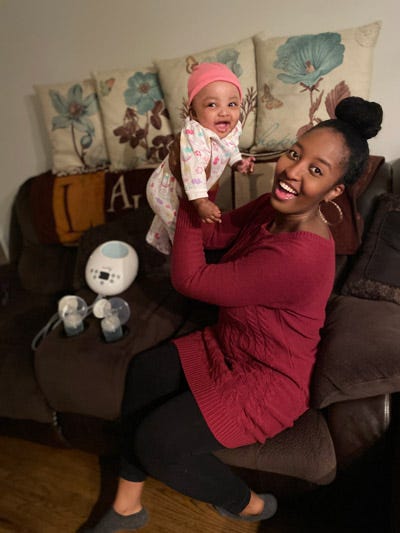 All content published on the Motif Medical site is credited for information purposes only. This information should not substitute as medical advice, diagnosis, or treatment. Always consult your doctor or qualified health professional with any questions regarding the health of you or your baby.

Posted in Breastfeeding and Breast Pumping

NEXT →
Breastfeeding After A C-Section

Subscribe to our newsletter to learn about the latest giveaways, products, and more!