The store will not work correctly in the case when cookies are disabled.

Caffeine and Breastfeeding: How Much is Safe?

With most things in nutrition, moderation is going to be key. This is true specifically for caffeine consumption, as well! Common concerns with breastfeeding mothers and their caffeine intake range from baby sleeping well to the effect it has on the milk itself, but for many, that cup of coffee is a source of comfort and energy after a late night nursing. So let's discuss what we actually know to be true about caffeine and lactation, and how much is actually safe to have.

Caffeine takes approximately 10-15 minutes to enter the bloodstream and into breastmilk. Depending on how fast it is consumed, on average, caffeine will reach its highest concentration in about 60 minutes. At that point, the body begins to metabolize it and lower the levels. What is that concentration, though?

The evidence suggests that only 1-3.4% of the caffeine ingested actually gets ingested by the baby through breastmilk. It is also with the understanding that there is only low to moderate caffeine intake from the breastfeeding woman, 1-3 cups (8-24oz) a day of coffee, for example. This is a relatively low caffeine content, and therefore should not have an effect on behavior or sleep. However, newborns may be more sensitive to the effects of caffeine at the larger end of that range.

Look for fussiness and irritability in breastfed babies and cut back as needed. Age will improve the sensitivity. The American Academy of Pediatrics cohort study on nighttime fussiness in conjunction with caffeine intake concludes that “caffeine consumption during pregnancy and by nursing mothers seems not to have consequences on sleep of infants at the age of 3 months.”


What is a Low-Risk Amount of Caffeine?

According to the CDC, the recommendation is to have less than 300 mg of caffeine a day for breastfeeding and lactating women:


Caffeine passes from the mother to infant in small amounts through breast milk, but usually does not adversely affect the infant when the mother consumes low to moderate amounts (about 300 milligrams or less per day, which is about 2 to 3 cups of coffee)

Here is a list of common items that contain caffeine and the approximate caffeine levels in milligrams:W25pbmphX3RhYmxlcyBpZD0iMTE0NDIiXQ==


Will Drinking Caffeinated Beverages Lower or Affect My Supply? 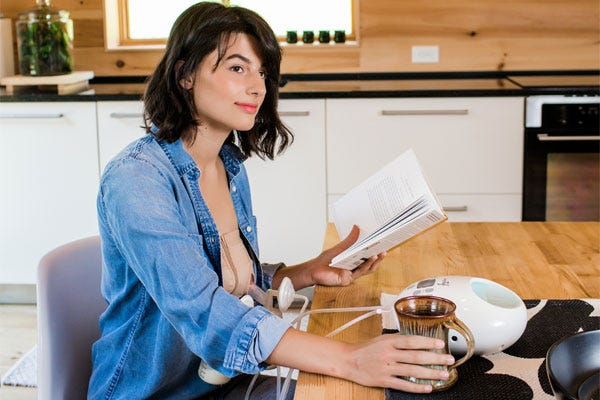 The general answer to this is, “No.” There is no evidence suggesting a change in volume or ability to produce due to caffeine intake. As for the quality of milk, nutrient content, calories, and other ingredients specific to breastmilk, such as immune-boosting leukocytes, are not changed by caffeine consumption. The trace amounts found during peak concentration will, in fact, filter back out of the milk through the body’s metabolic breakdown and digestion.

No effect on a breastfeeding baby with moderate intake of caffeine! Enjoy your caffeinated drinks like coffee or afternoon soda to get you through your day. Remember to stay hydrated with water and electrolyte drinks, as needed, too.

All content published on the Motif Medical site is credited for information purposes only. This information should not substitute as medical advice, diagnosis, or treatment. Always consult your doctor or qualified health professional with any questions regarding the health of you or your baby.

NEXT →
When Does Milk Come In: What You Need to Know

Subscribe to our newsletter to learn about the latest giveaways, products, and more!